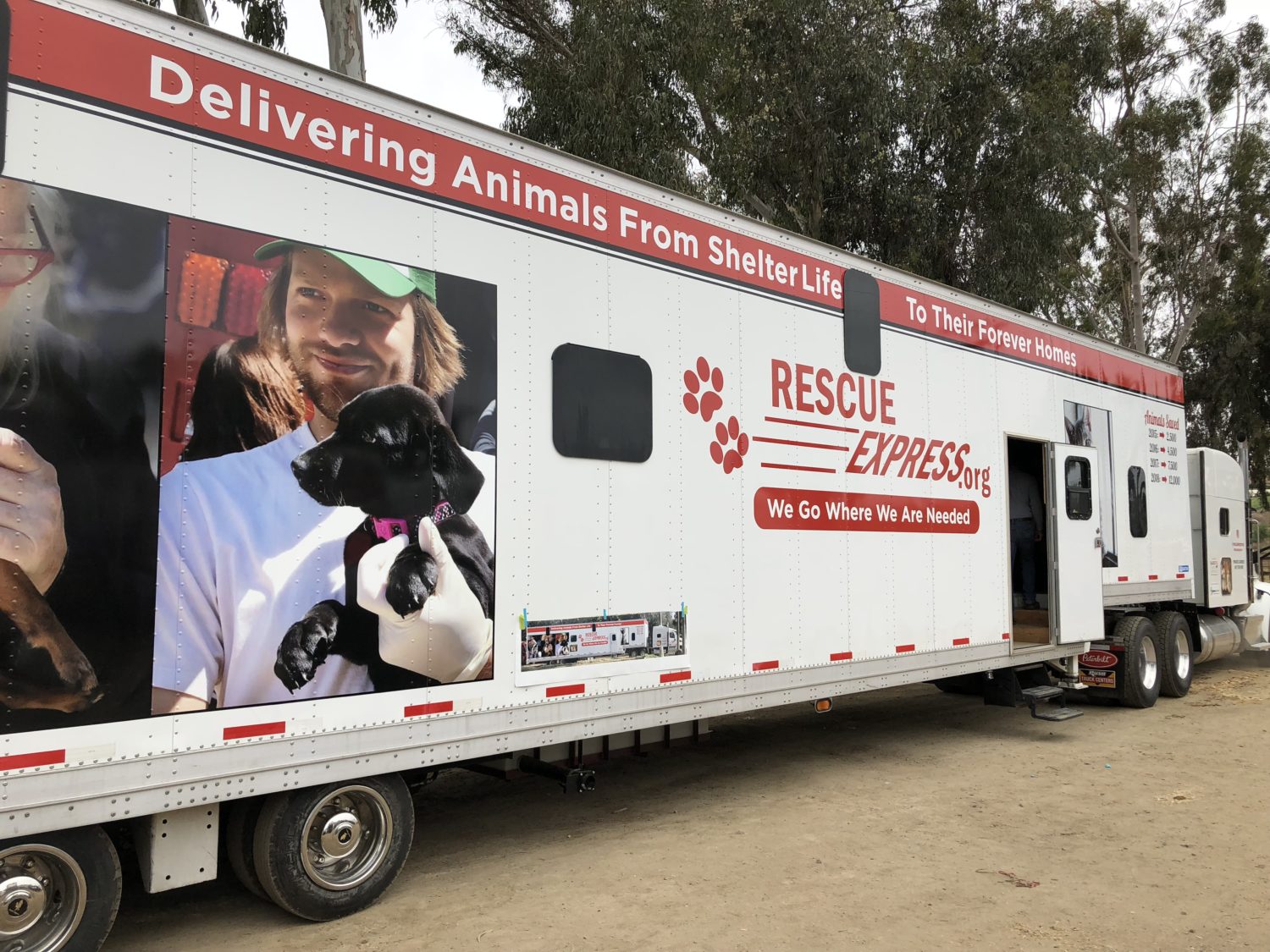 The long awaited arrival of the new Rescue Express tractor trailer is here! This new rescue transport vehicle is wrapped and ready to hit the road, and you know what that means- more lives will be saved.

The new trailer has the capacity to hold up to 350 animals per trip. Up until now, the Rescue Express weekend runs were made in buses that were converted and outfitted to safely and humanely transport upwards of 200 dogs and cats on each trip- quite an achievement, except for the fact that there are typically 300 reservations. Nothing breaks the heart of a rescue worker quite so much as leaving an animal behind, and in the world of rescue transport, sometimes bigger is better.

The newest Recue Express transport vehicle. Outfitted with 275 carriers and a relief station for the dogs to have a potty. When it comes to saving lives, sometimes bigger is better.

“The problem is that every week we were running the bus with 100 carriers, which typically holds about 150 animals; but we have 300 reservations so, sadly, we were leaving animals behind.” said Rescue Express Founder Mike McCarthy. “Our goal is to increase the number of animals we can save, improve the quality of the transport and reduce the cost per animal- and it’s not like we’re going to have to go looking for more dogs and cats, they’re already waiting for us.” Mike McCarthy and friends at home between rescue runs.

It’s a little known fact that there is a shortage of adoptable animals in the Pacific Northwest. While hundreds of dogs and cats are suffering needlessly in overcrowded shelters throughout California, there are people in Oregon and Washington just waiting to bring a rescued pet into their home. It is for this reason that once a week Rescue Express leaves San Diego gathering homeless pets from our rescue partners along the I5 corridor up to Redding, before delivering them to their new lives from Southern Oregon all the way up to Burlington Washington.

In addition to increasing the number of saved lives, the new vehicles are all about keeping both the animals and humans safe and comfortable throughout the journey. Since 2015 Rescue Express has transported 15,000 animals without incident, but the new trailer has some perks that keep everyone happy.

For starters, there is a Relief Station, a big stainless steel enclosure where a dog can go in and have a potty and we simply hose it down the drain into a tank underneath, sanitize, and bring in the next in line. The new trailer is climate controlled and features a Crew Room with two bunks and three chairs so that our team can stay rested and ready for action. There is also a chair outside the crew quarters so one of the team members can sit in back with the animals, which makes everyone rest a little more easily.

Saving the lives of these beautiful animals is what drives us. We Go Where We Are Needed and We Need Your Help To Get There! SAVE A LIFE——->>> DONATE NOW! Healthy and happy hounds, fresh off the bus from Louisiana. Thank you to Thrive Animal Rescue for taking 117 sweet souls from The Puppy Pipeline rescue run!